You are here: Home / News / Knowledge / The difference between fiber optic converter and OLT

The difference between fiber optic converter and OLT

What is the difference between a fiber optic converter and a OLT?

Optical fiber converter is a very cost-effective and flexible device. The common use is to convert the electrical signal in the twisted pair into an optical signal. It is generally used when the Ethernet copper cable cannot be covered and the optical fiber must be used to extend the transmission distance. In the actual network environment, it also played a huge role in helping to connect the last mile of the optical fiber line to the metropolitan area network and the outer network. A OLT is a network device used to forward electrical (optical) signals. It plays a core role in the mutual communication between wired network devices (such as computers, printers, computers, etc.). It is usually connected to a router so that you can pass optical Cat accesses the network.

Fiber optic converter are relatively simple network hardware devices with fewer interfaces than OLT, so their wiring and connections are relatively simple. They can be used alone or installed on a rack. Since the fiber optic converter is a plug-and-play device, its installation steps are also very simple: just insert the corresponding copper cable and optical fiber patch card into the corresponding electrical and optical ports, and then connect the copper cable and optical fiber to the network device Both ends are fine.

The network OLT can be used alone in a home network or small office, or it can be installed on a rack in a large data center network. Generally, you need to insert the module into the corresponding port, and then use the corresponding network cable or optical fiber patch cord to connect to the computer or other network equipment. In a high-density cabling environment, patch panels, fiber optic boxes, and cable management tools need to be used to manage cables and simplify wiring. For managed network OLT, it needs to be equipped with some advanced functions, such as SNMP, VLAN, IGMP and other functions.

Electrical-to-optical (optical-to-electricity) and optical-to-optical fiber opticconverterare two common types. The former can convert electrical signals into optical signals to realize the connection of devices based on copper cabling to extend the transmission distance; while the latter can Realize single-multimode conversion, single-dual fiber conversion and wavelength conversion (mainly converting conventional wavelengths of 1310nm and 1550nm into WDM wavelengths).

Compared with the optical converter, the function of the OLT is much more complicated, which is determined by its network operating system. According to the network layer, they can be divided into layer 2, layer 3, and layer 4 OLT. Normally, the layer 2 OLT is the basic OLT used to transmit data and perform error checking on each frame sent and received. Layer 3 and Layer 4 OLT have routing functions, which can actively send data packets to the destination in the best way. In addition, they also have some advanced functions, such as MLAG, STP, VXLAN, etc.

Optical converter vs. OLT: when to choose which one?

1. Fiber optic converter are usually used when Ethernet cables cannot be covered and fiber jumpers must be used to extend the transmission distance within a limited budget. They can be used for the construction of local area networks and inter-city area networks, such as enterprise networks and campus backbone networks.

2. The network OLT has multiple ports for different devices (such as computers and printers) to communicate in the local area network. In other words, the network OLT is a more flexible device, which can be easily added to the network to expand the network capacity. In addition, it can prevent the traffic between two devices from obstructing your other devices on the same network, allowing you to easily control the network. 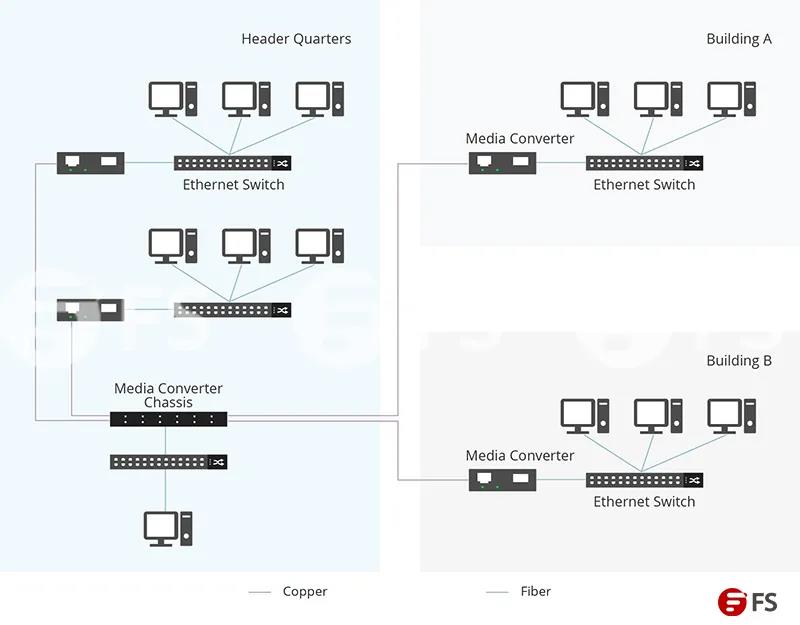 The role of fiber optic converter and OLT are different, but they can work together in an Ethernet network. One thing to remember is that fiber optic converter are mainly used for copper-to-fiber conversion to extend the transmission distance, while network OLT are used to connect network devices together for data sharing and communication.